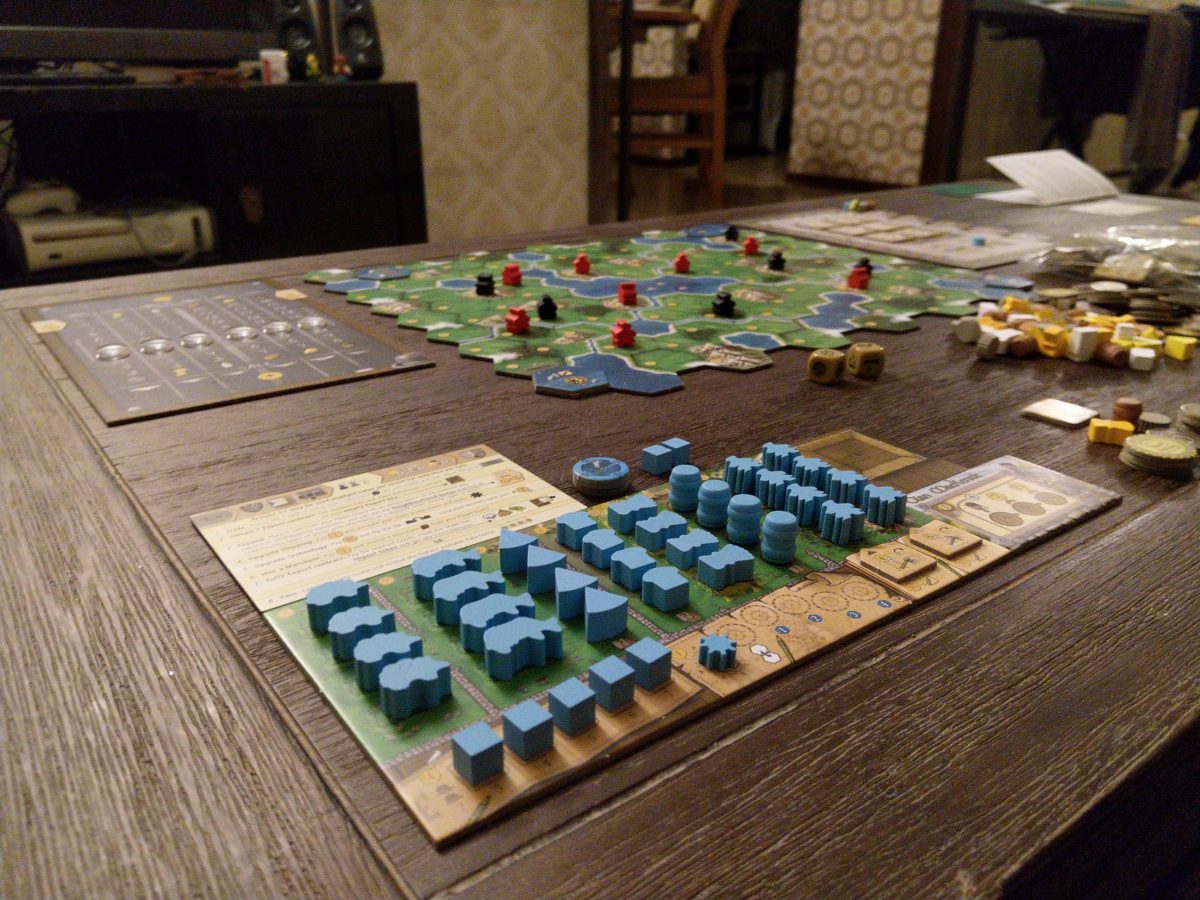 Clans of Caledonia was published in 2017. The designer is Juma Al-JouJou, and the artist is the renowned Klemens Franz. 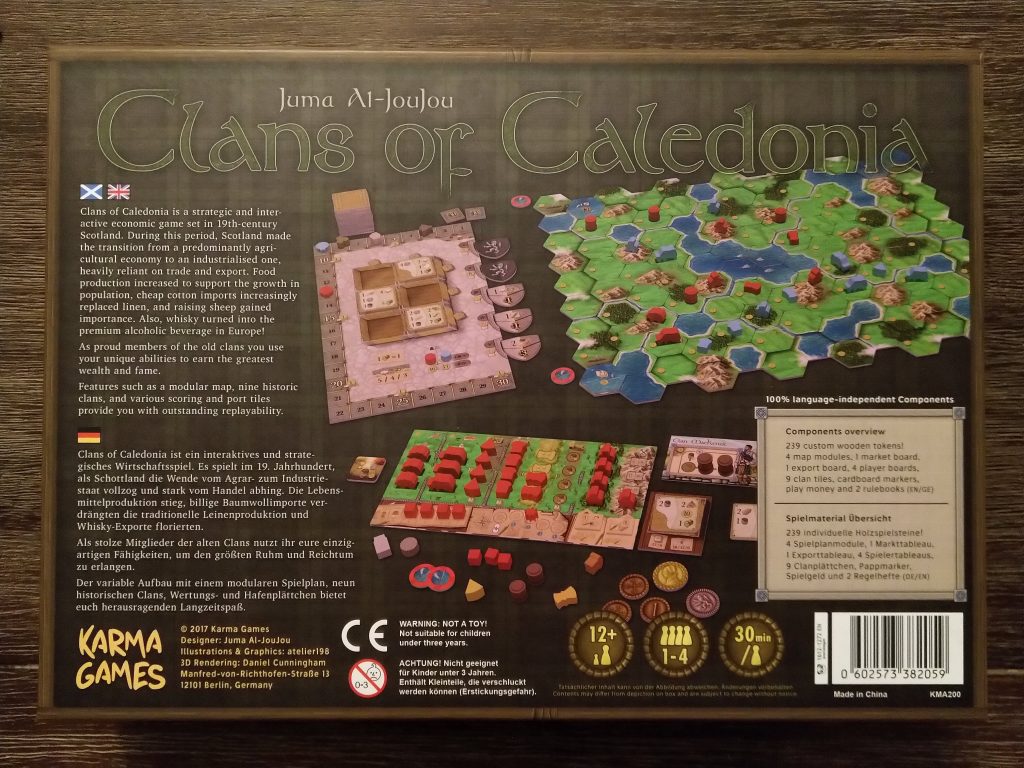 It is an economic strategy game, in much the same vein as games like Terra Mystica and Gaia Project. Players take the role of clans in 19th-century Scotland, trading and exporting in order to grow their economic clout.

At the time of writing, I have played Clans of Caledonia a total of 11 times with the following player counts:

First of all, the aesthetic. I adore Klemens’ style and direction, which was one of the first things that drew me to this game. I recognised it immediately, and it fits the theme perfectly. Kudos to Juma for picking the perfect artist for this project.

A frequent complaint is that the components are a bit small and can be fiddly, particularly during setup. 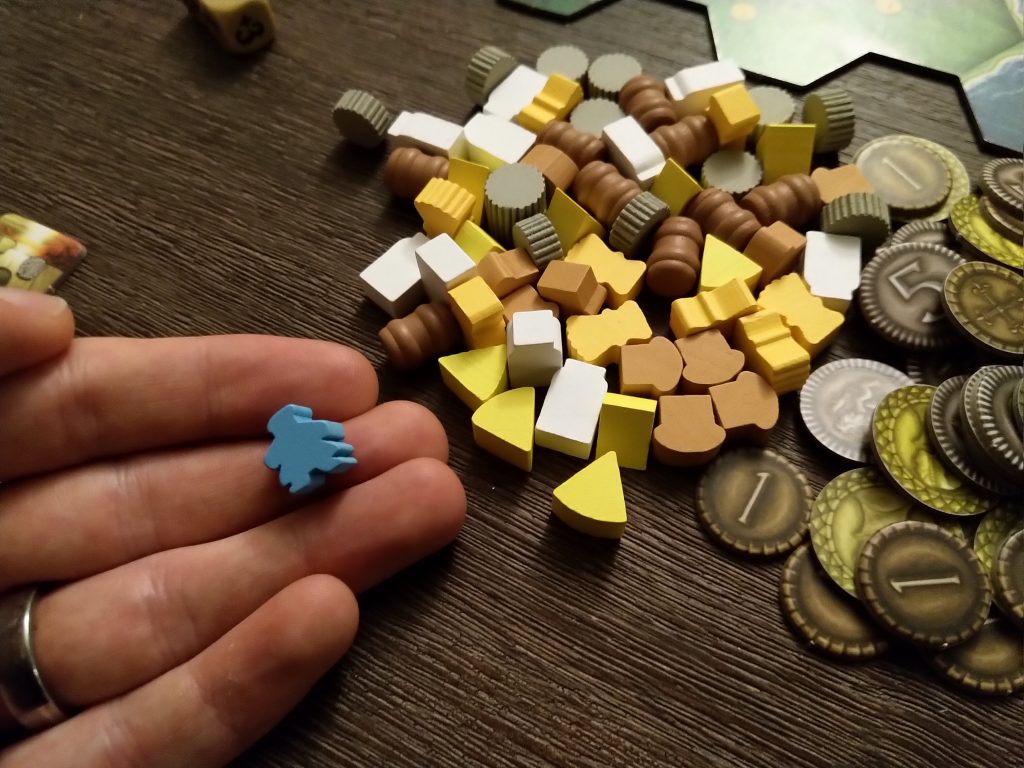 This is a valid complaint for sure, although it doesn’t really bother me personally. One thing that I find very interesting is how the game looks as light as a feather on the table, which belies its rather hefty nature. I actually appreciate this, as the footprint is minimal. You’d be hard-pressed to find a bigger size-to-weight discrepancy among games like this.

The components themselves, while small, are of a very high quality. I don’t have the metal coins (sadly), but the cardboard ones are perfectly serviceable. The one thing which would have been cool is if the merchant tokens were tiny bowler hats, but I digress – everything works well and the shape of the tokens evokes the theme nicely. All the cardboard is solidly thick as well. 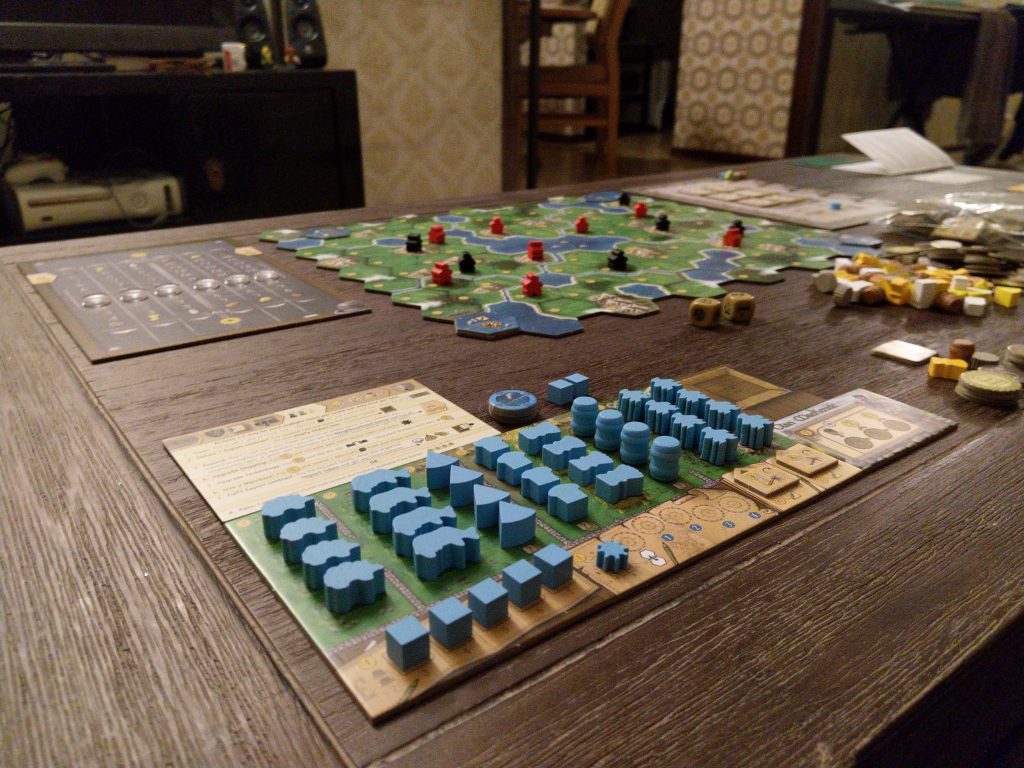 The main board itself is gorgeous and extremely clear. Being able to differentiate between different terrain types is important and the design of the board makes it easy at a glance.

Every turn, players can take one of eight different actions:

I won’t go into detail on every action, but perhaps the most important is Expand, where you select one of your pieces on your player board, and move it to a space on the main board, paying the cost of the piece and the cost on the board.

This reveals an icon on your player board, which indicates a type of resource or amount of money that you’ll gain in the production phase, which occurs after everyone has passed (usually after running out of money). 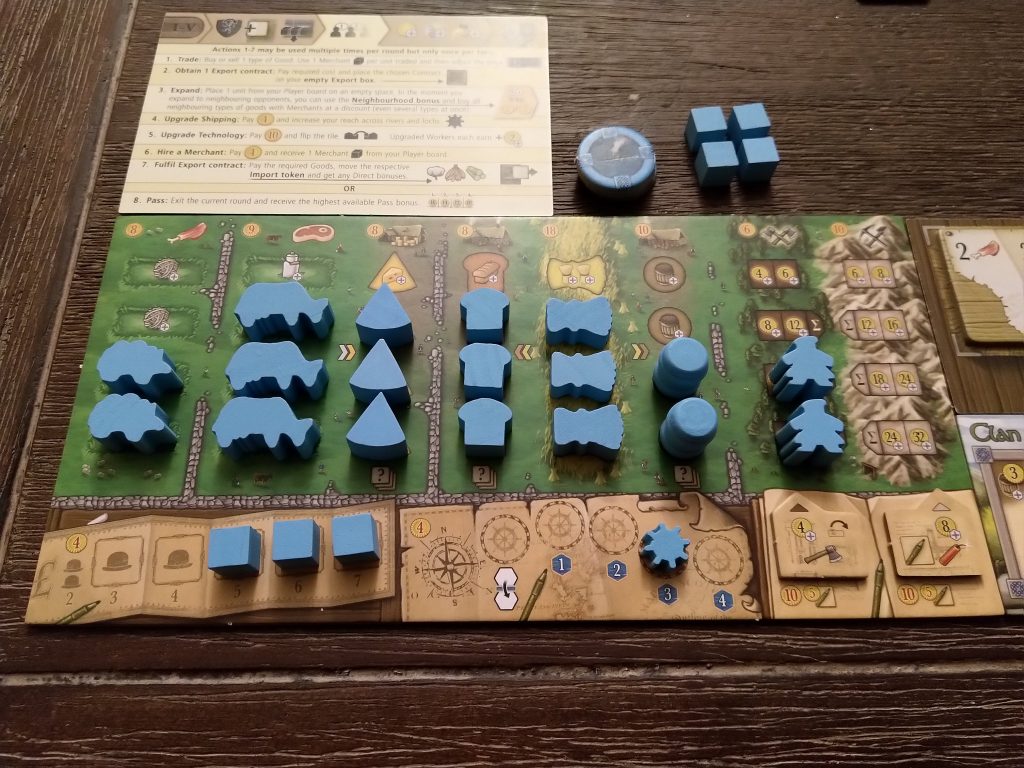 The main use of the resources is to fulfill export contracts, which are one of the primary point sources in the game. Most of the wins I’ve seen have been from the players who were best able to spin up an exporting engine, churning through contracts and racking up big points.

There are also variable player powers in the form of nine different clans. 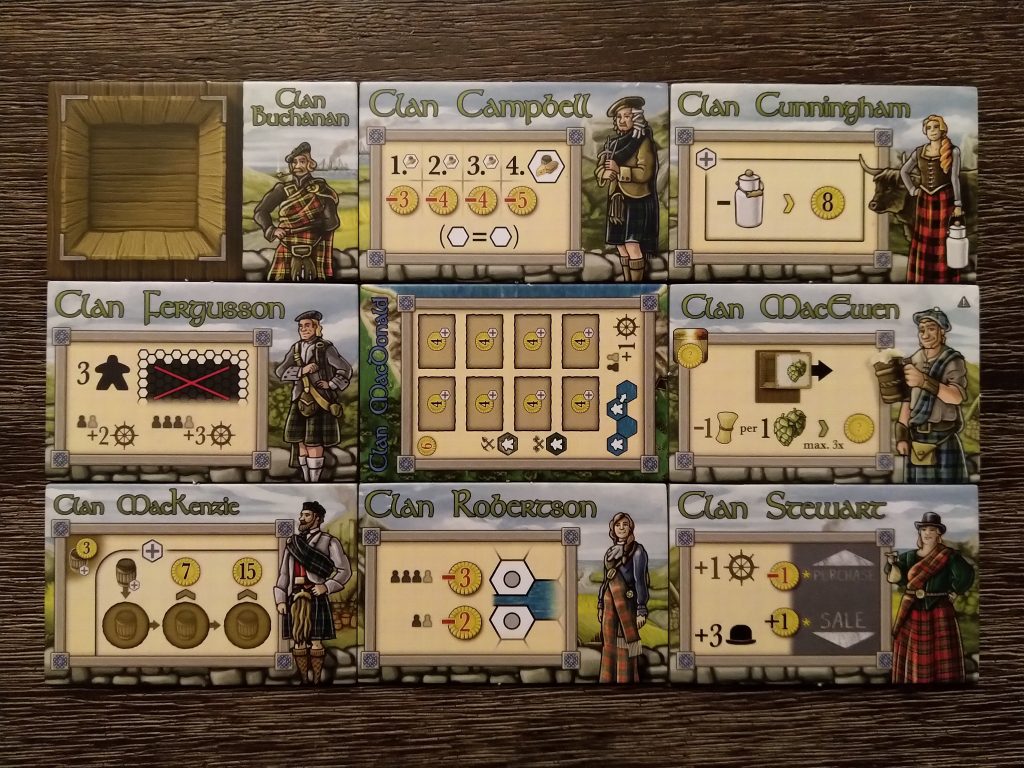 As far as I could tell, they are all relatively true to their real-life inspirations. Each one has a unique special ability and/or starting advantage to differentiate from the others. For example, Stewart starts with more merchants and excels at exploiting the market, while MacDonald is the only clan that can place fishermen on water.

I absolutely love the core gameplay loop. Trying to build up an economic engine that matches your clan strengths and the contract tiles as closely as possible, while balancing all of that with ensuring you can generate money for future rounds (running out of money stings). Contracts are hard to complete early on while being much cheaper to acquire, and they get easier to complete in the late game while also getting much more expensive. And all the while, you have to consider board placement for bonuses and potential end-game scoring boosts.

It plays well from solo to 4p, and has a couple brilliant mechanisms for tightening up the board at lower player counts. 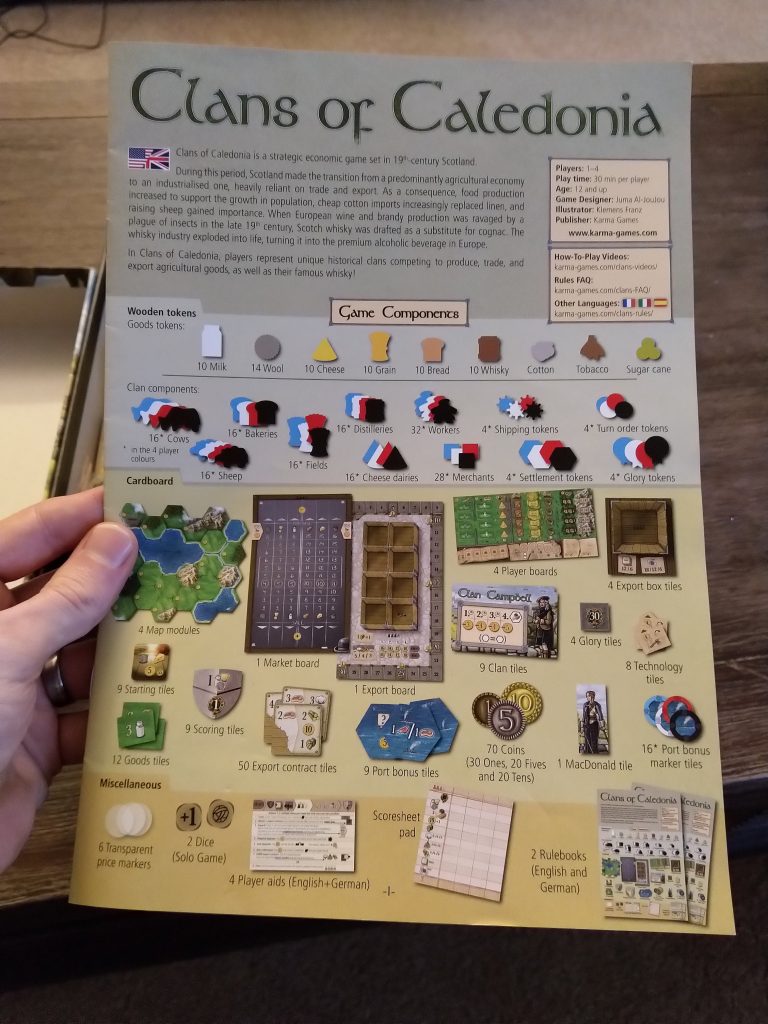 The rulebook is well-written, following a clear structure that can be read from start to finish.

The overall layout and design of the iconography on the various components is very well done. I am mightily impressed with the fact that once you understand the basic flow of the game, it is largely self-documenting. The only times I ever had to check the rulebook after the initial play were when I was playing with new clans. For a game as rich as this, that is quite an impressive feat. 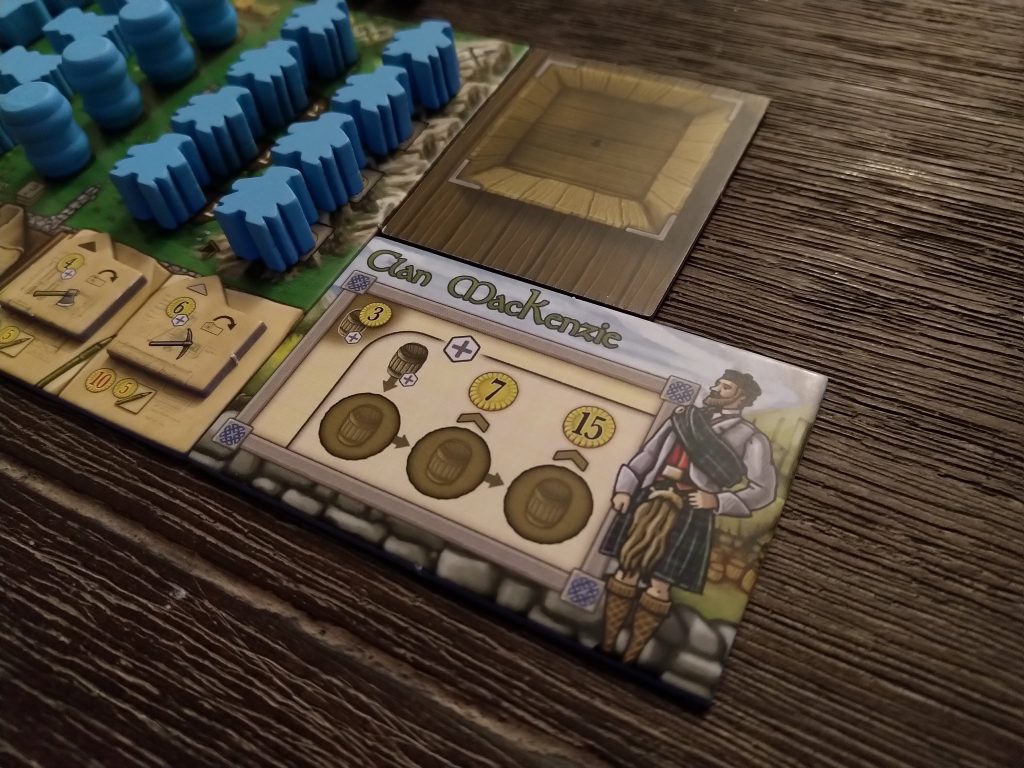 The one minor point against the rules would be the way settlement scoring works, which is how you determine the points you receive for piece placement on the board at the end of the game. It makes perfect sense once you understand it, but isn’t the most intuitive.

The game is fun, satisfying, and very diverse. No play has felt the same as another so far, and the interplay is so strong that you really have to watch what your opponents are doing. It feels intense and I’ve been mentally drained at the end of every game so far, but I always want more.

The clans help a lot with variability, and the main board itself is also modular. It consists of four parts that are all double-sided for a total of 16 possible combinations. 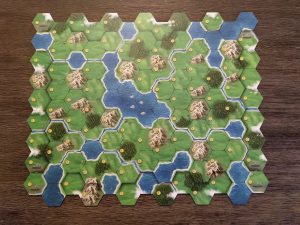 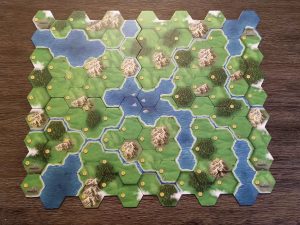 There are special tiles that give players bonus points at the end of each round for fulfilling certain conditions, and also port tiles that give bonuses to players who manage to reach them. These tiles are worth paying attention to, and very much alter the game as players try to exploit them.

The export contracts also ensure that players need to focus on different strategies game-to-game. This will in turn impact the market, fundamentally altering the way the game plays (more on that shortly). 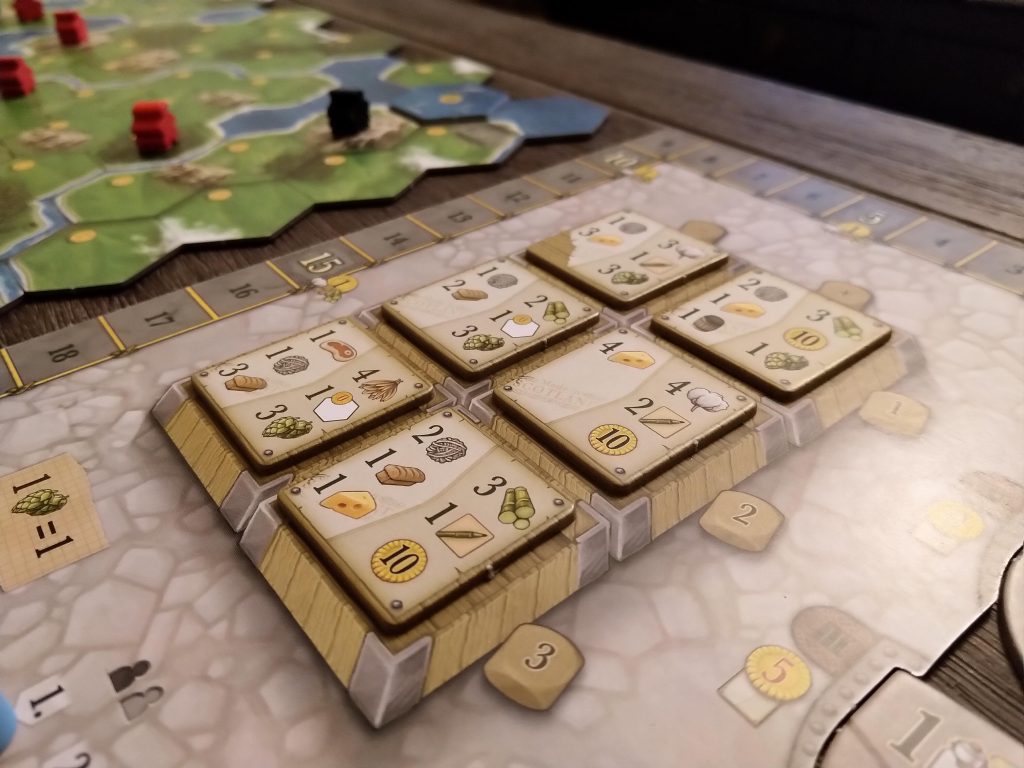 A truly excellent amount of replayability for such a streamlined experience, although I wouldn’t be surprised to see an expansion or two. New clans? Yes please, Juma!

So many things about this game grab me, but the standout if I had to pick would be the market. 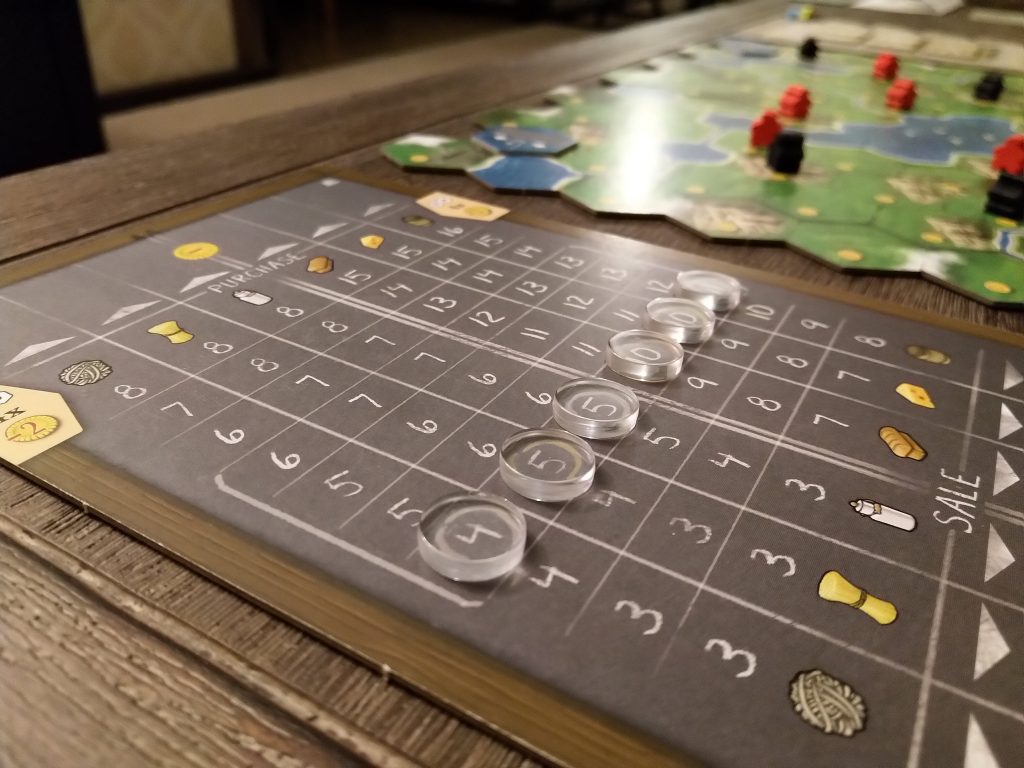 Whenever players buy on the market, the resource they bought increases in value, and conversely when they sell, it decreases. This massively changes the game, as when a resource is expensive, players may want to produce it to sell, and when a resource is cheap, players may focus less on producing it themselves. The observant will pay attention to what their opponents are doing with the market and use it to their advantage.

It is yet another example in a sea of examples of perfect and intuitive theme integration with a brilliant mechanism. Do I put out wheat fields, or simply buy wheat on the market? Well, that all depends on how expensive wheat is. Keep an eye on what your opponents are up to, they may need wheat themselves, which will drive the price up… in which case maybe it does make sense to put out wheat fields to capitalise on their need! It all hums perfectly, and as mentioned above, no two games play the same because of it.

Overall, I am extremely happy with Clans of Caledonia. It has become a staple and will definitely be staying in my collection for some time to come. Well done Juma, you’ve created a real gem here.