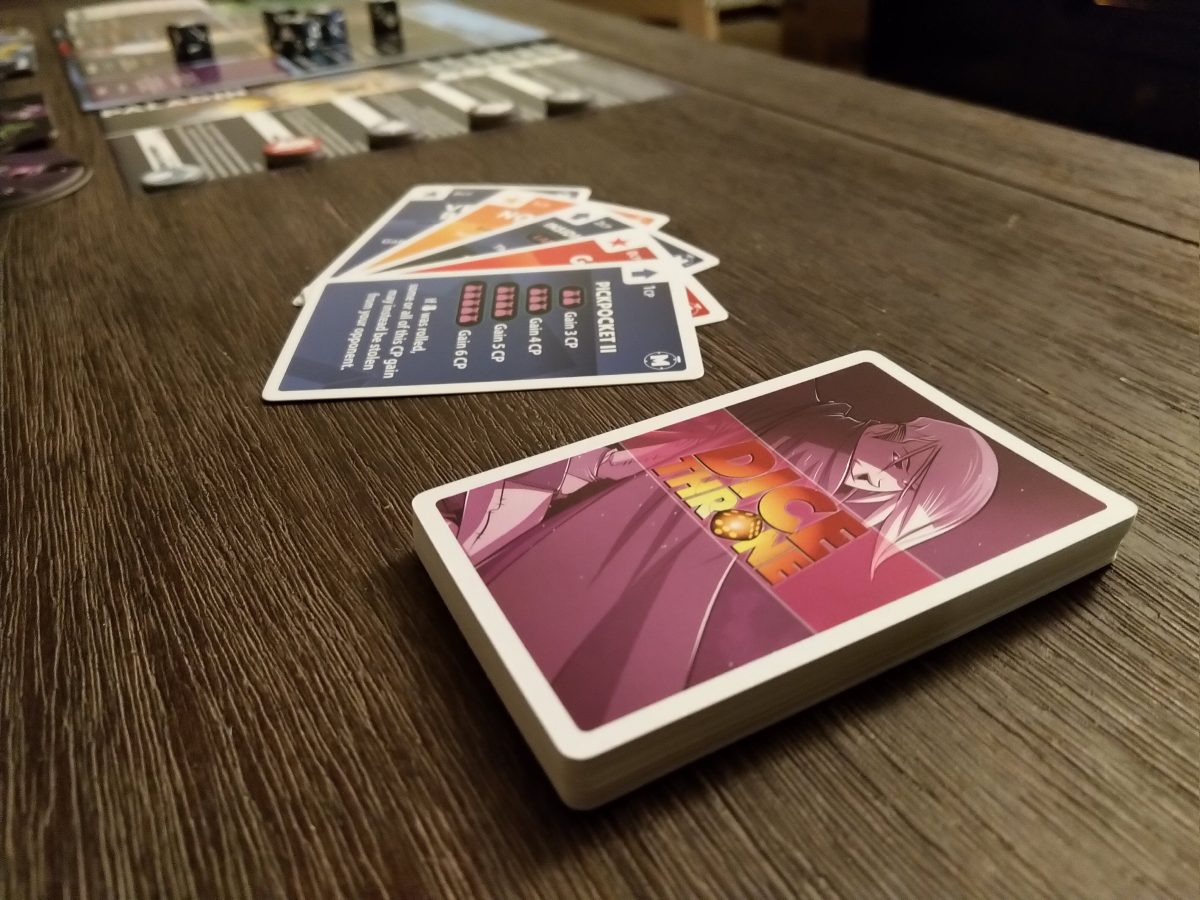 Dice Throne was Kickstarted at the beginning of 2017, shipping to backers just under a year later. A retail version was published in 2018. The designers are Nate Chatellier and Manny Trembley, the latter of whom is also the artist. 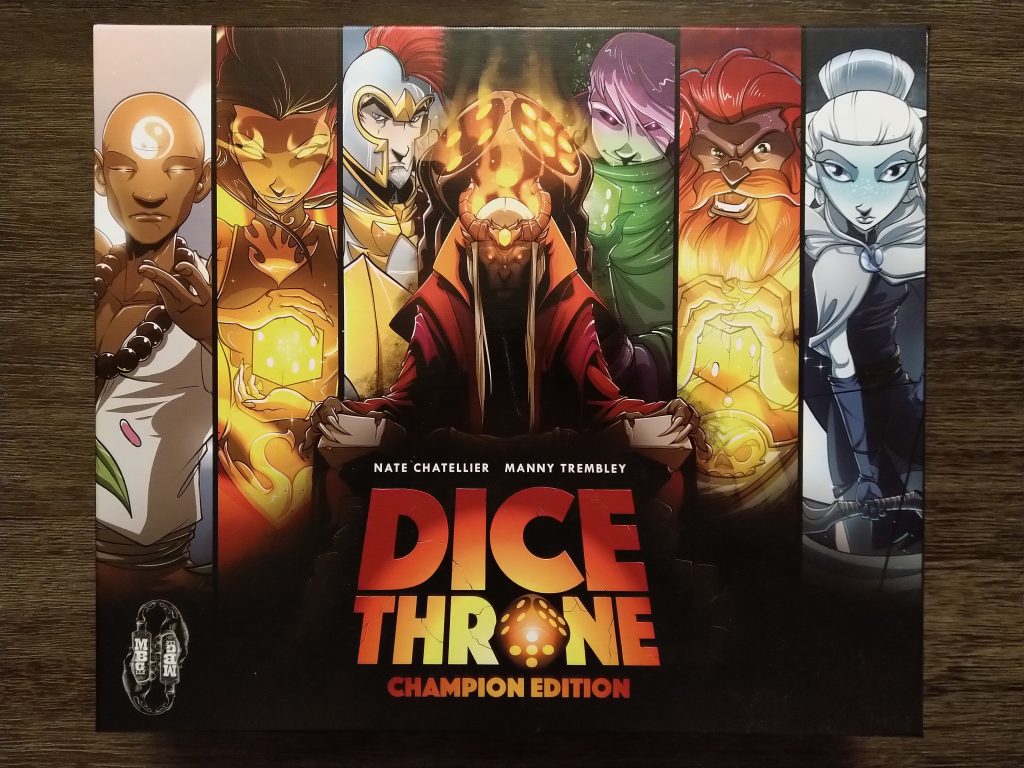 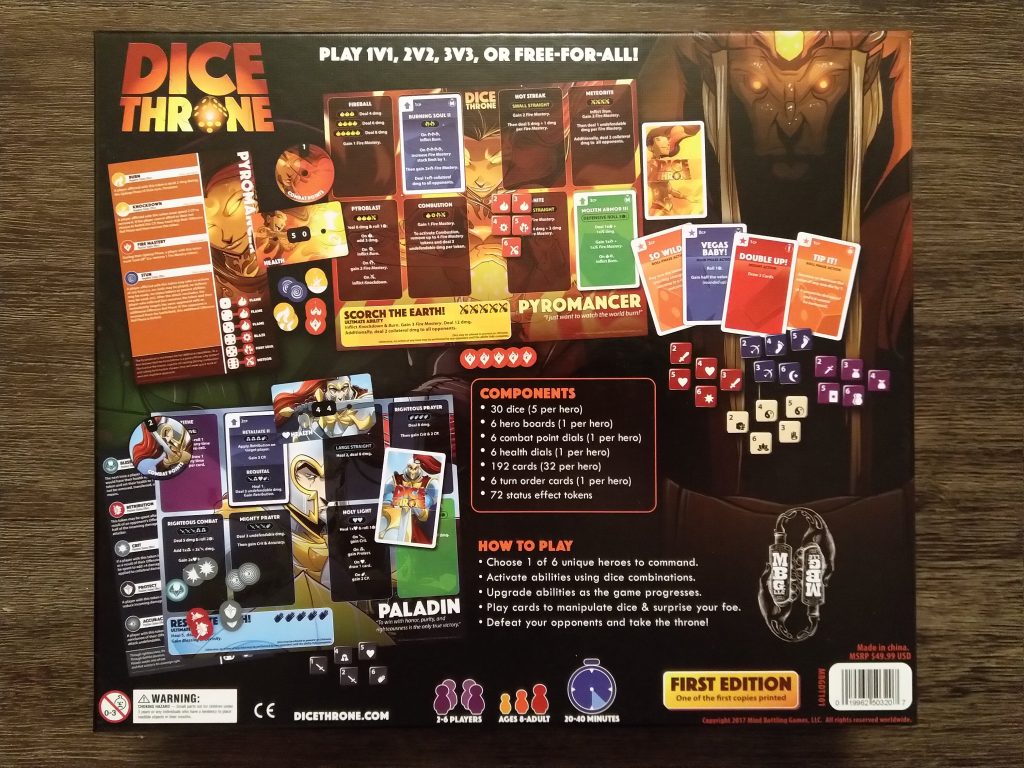 Dice Throne is a dice chucking game (what a twist!), with players competing in individual or team combat to take the eponymous throne as one of 6 different heroes. Players will use cards to power up their chosen hero, and roll dice to determine their actions from turn to turn.

At the time of writing, I have played Dice Throne a total of 12 times with the following player counts:

First, the art. It is an outstanding style and direction and fits the theme perfectly. Manny Trembley has done a fantastic job, which is no surprise given his background as a concept artist. The artwork on the boards, sheets and components is all gorgeous and evocative of the classes and their archetypes. You really do feel like you are in control of a powerful hero in combat. 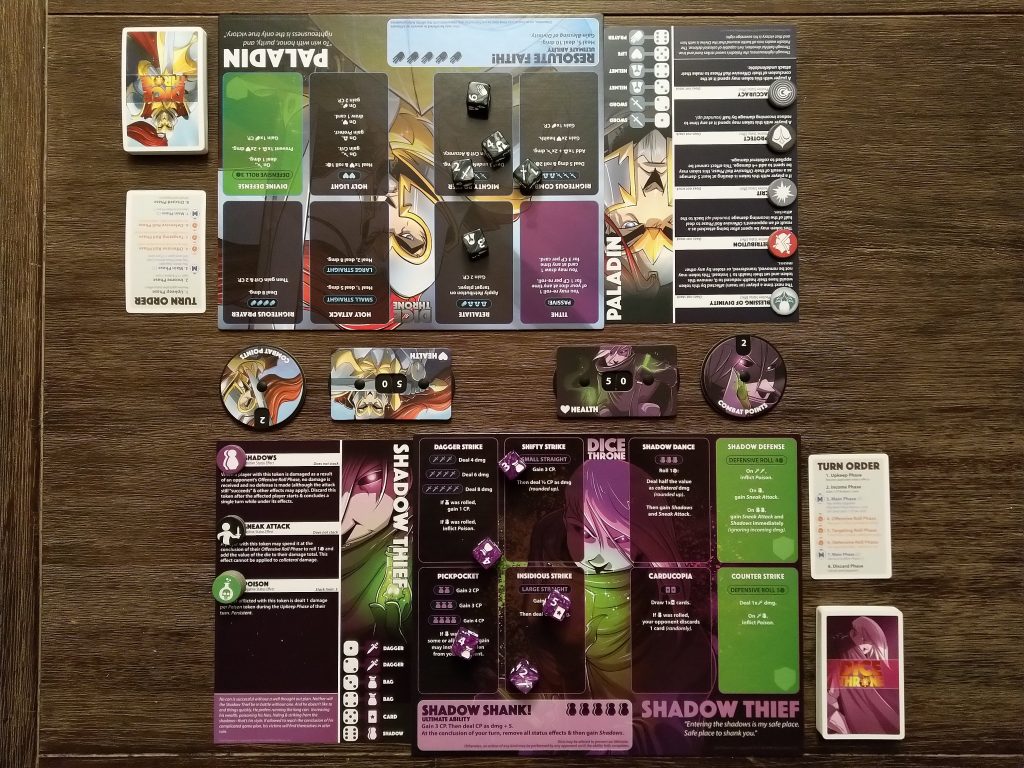 One thing that some may see as negative is the lack of artwork on the card faces, but it doesn’t bother me too much and I actually appreciate the clean look. It makes it easy to parse the information on the cards.

In terms of the component quality, it varies, but is overall very solid. The character boards are nice and thick and feel high-quality, and all the components are very satisfying to use and fit for purpose. The status sheets are made of a lightly glossed card stock. If you have the Kickstarter edition, it comes with stunning swirly dice, but they are far from a necessity. I have played a retail copy as well as the Kickstarter copy and all the dice are fantastic. Just bulky enough to feel meaningful, but not unwieldy. 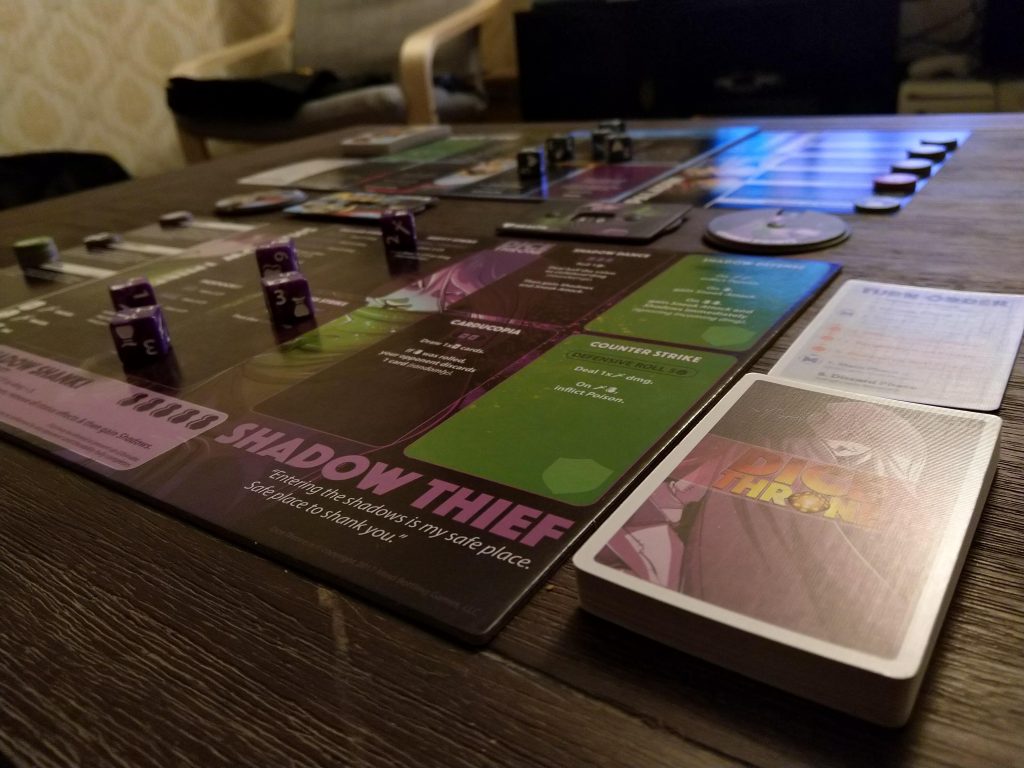 The cards feel pretty good and have a very nice linen finish, but given this is the kind of game that will likely see a lot of plays and a lot of shuffling as a result, I would recommend sleeving.

Finally, I have to mention the outstanding inserts. Every character has an insert that fits their status tokens, dice, and cards. These inserts are phenomenal. I can’t emphasise enough how helpful they are in terms of speeding up setup time. All you have to do to start playing is grab your character’s board, status sheet, and insert, and you’re ready to go. Such a small thing, but it makes all the difference. 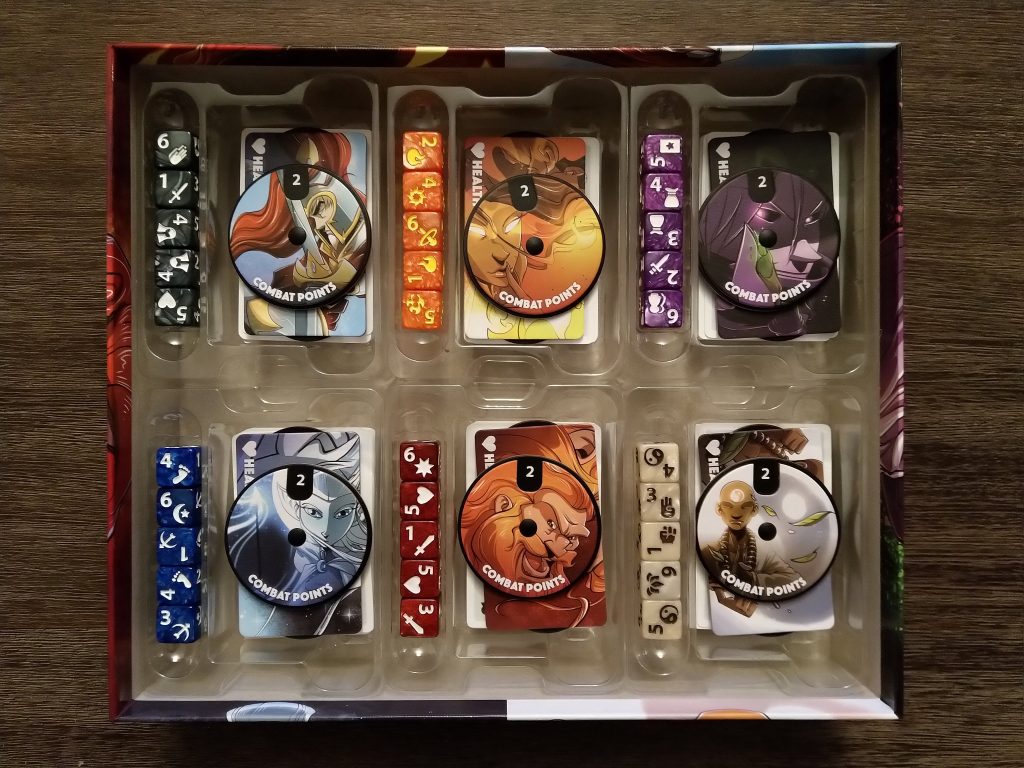 Dice Throne is a fighting game with cards for upgrades and effects, and Yahtzee-style dice rolling and holding to determine moves. Last player or team standing wins.

You can draw and play cards that either upgrade your character board or act as once-offs (to give yourself more combat points – the currency of the game, modify dice rolls, and many other unique effects). 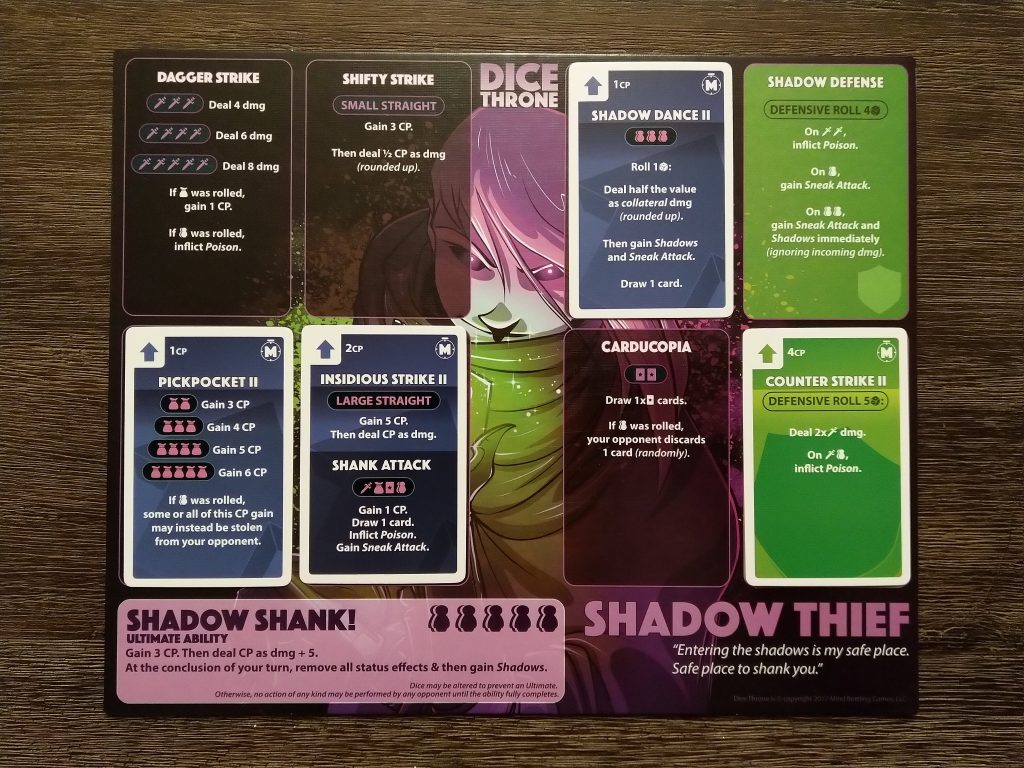 To attack, you roll dice three times, holding as you wish, and match symbols or numbers to actions on your character board. Sounds simple, and it is, but there is some intriguing depth to it. For example, rolling five sixes results in an Ultimate, which is usually a crazy-powerful attack that decimates anyone in its path, but be careful – other players can alter your rolls to negate your actions using their own cards. Or perhaps they have a particularly powerful defensive roll that can negate the damage, or do even more to you in turn. There is so much variety in this game that is better experienced than described. 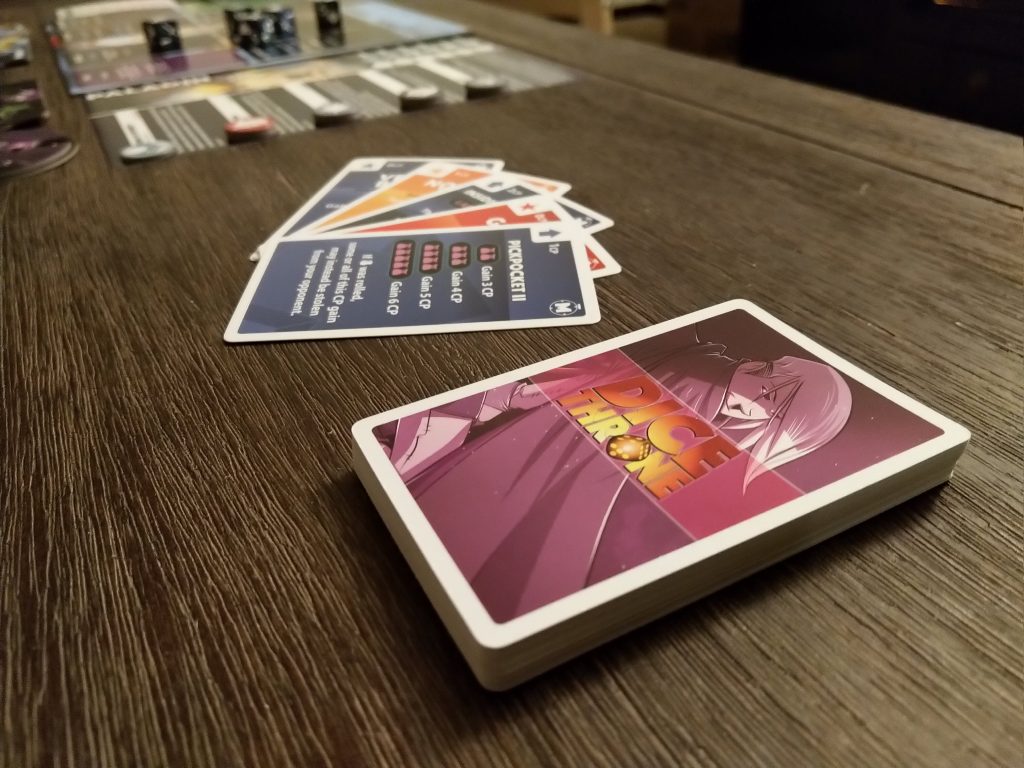 The best player count is clearly 2p 1v1, but the game supports any count up to 6p, with both team and free-for-all modes.

One potential downside that may bother some is that there is player elimination in free-for-all modes above 2p. But if you have an even number of players over two, there is no reason not to do a team game which eliminates the problem due to the team sharing a health pool. Or spin up two or three separate games thanks to the six classes with no shared components between them. 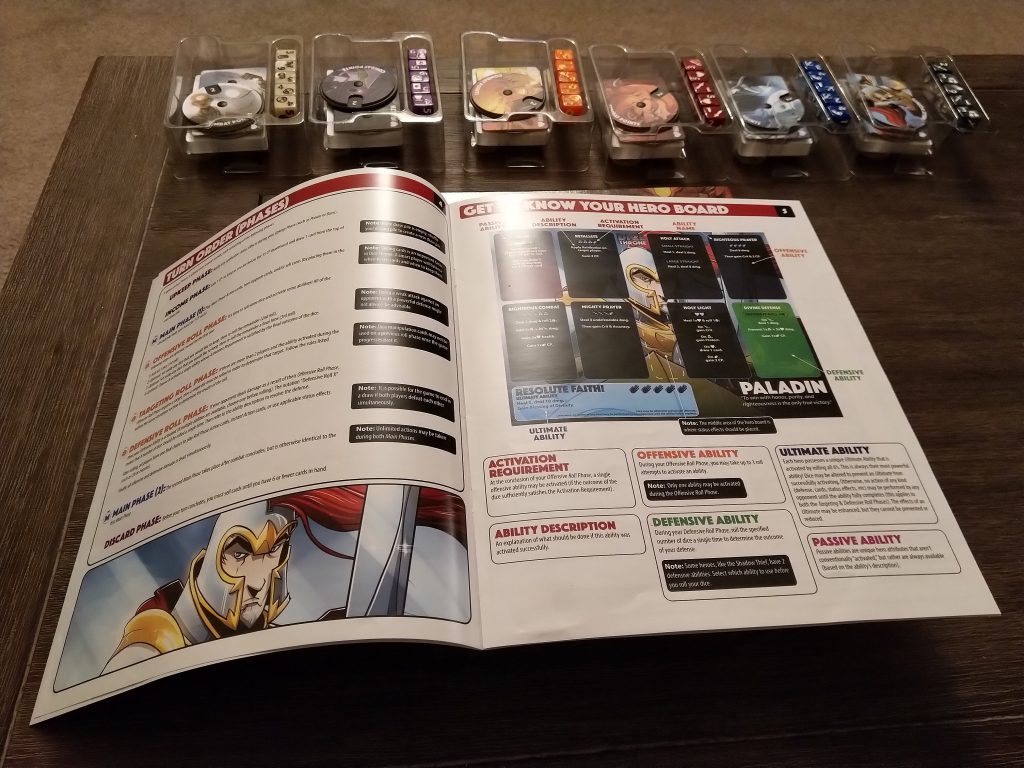 The rulebook is good, but nothing spectacular. You may have to look through it a few times to understand everything, and I had to turn to an online FAQ for a question I had about the team mode. But at its heart, this is quite a light game, and once you’ve played a round or two, it clicks.

There is no real unexpected weight – although that’s not to say there’s no strategy! The weight is in the decisions you make rather than the complexity of the rules, which is perfect for what is essentially a streamlined fighting game. And yes, there is definitely luck involved, but ensuring you’re prepared to mitigate bad rolls is a key component of a good strategy.

Also, a minor thing which we appreciated early on is that the classes each have a rating in the rulebook to indicate their level of complexity. Although, again, the game itself is quite simple and none of the classes are going to overwhelm you.

A key aspect that enhanced the replayability of Dice Throne is the quick playing time. Standard game length is around half an hour, but depending on a variety of factors, matches can be as short as 15 minutes. Long enough to get some real enjoyment out of it, but short enough that each play does not overstay its welcome and you’ll want to set up another straight away.

With regards to actual variety game-to-game, you won’t be disappointed here. As mentioned before, there are six classes in the box (so 15 possible match-ups in 1v1): 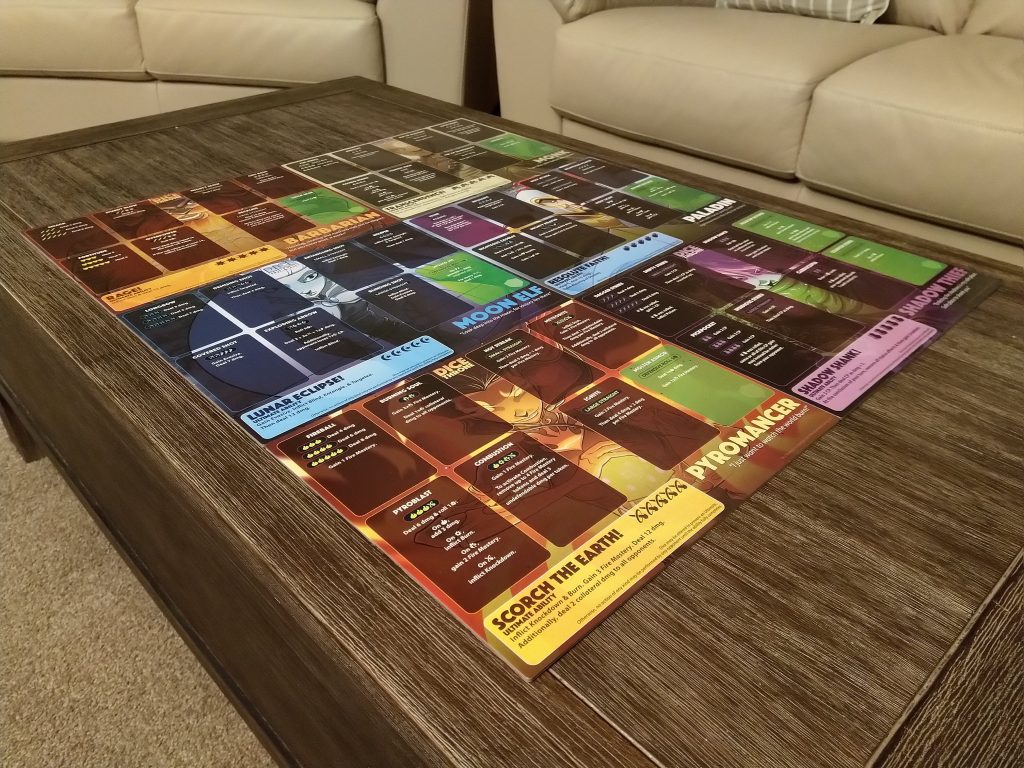 Every class plays and feels completely different. The Barbarian wrecks everything and heals. The Monk balances between attacking and defending. The Moon Elf is fast and agile. The Paladin can buff himself. The Pyromancer is a glass cannon. The Shadow Thief schemes from the cover of darkness. The wide variety in play styles means that games between different match-ups feel very unique, keeping things fresh.

There is also a Dice Throne: Season 2 on the way this year, and a Season 3 announced, which is no surprise given how easily expandable the system is. Season 2 will have 8 more heroes, bringing the total up to 14, or 91 possible match-ups in 1v1.

The “wow factor” here is simple; fun. Oh my goodness, this game is PURE fun. There’s something to be said for the joy of building up your character’s abilities, to then use by rolling dice. When the game gets down to the wire, and any hit could result in victory or defeat, the tension is brilliant. And the setup is so fast that you’ll want to play it again immediately. 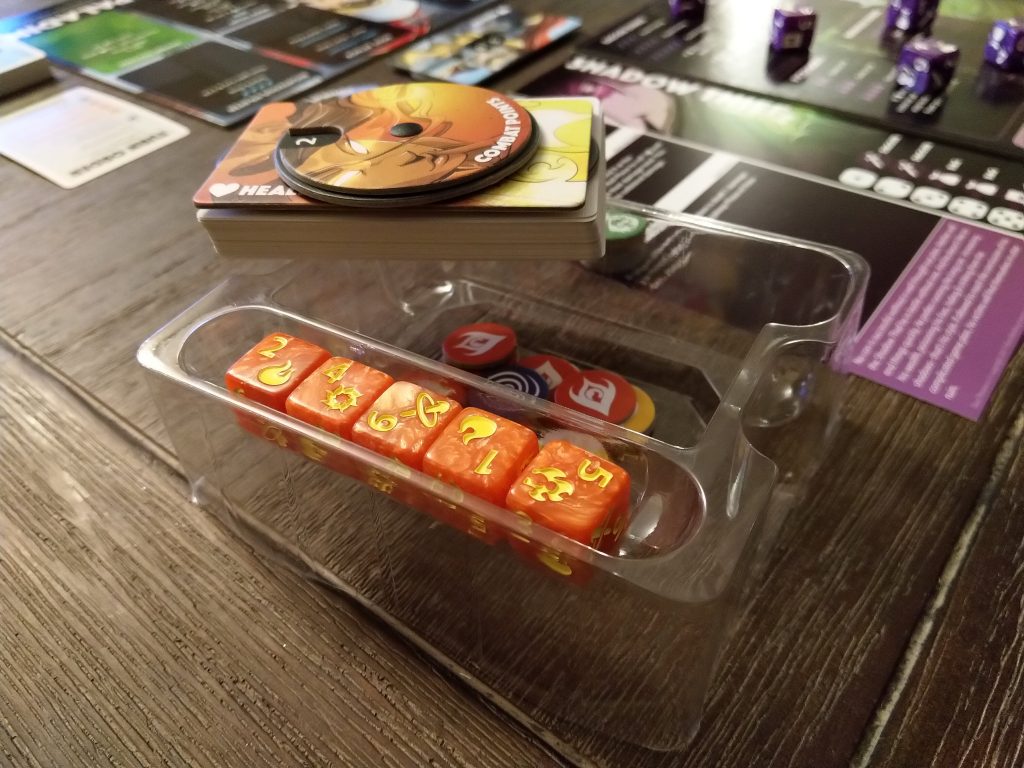 I also want to stress how balanced the characters are, despite each one feeling so fundamentally different from the next. I’ve played 12 times, and seen every different class win. Players (usually) start with 50 health, and the biggest final health difference in a 1v1 was 19 to 0, mostly due to a few misplays.

Dice Throne is so much fun to play, so chaotic turn-by-turn, and yet it never feels uneven. A very impressive feat.

Overall, I give Dice Throne a strong recommendation. It is ludicrously fun, matches go by quickly, and there is so much variety for such a simple system.